On 25th September 2014,  Rex Minerals was granted yet another Exploration Licence (EL5362)  on Yorke Peninsula   Referred to as the “Whiting Area”,  it  comprises seven  pockets of land (Areas A to G in  Figure 1 below).

These seven areas were amongst the last remaining pockets of land on Yorke Peninsula not yet taken up by a mining exploration company.   As Figure 2 below shows, the only other significant areas not covered by an exploration licence are at the bottom end of the Peninsula.   Rex now holds either a mining or exploration licence over  1,853 square kms of the Peninsula – the largest holding of any of the companies in the region.   Rex’s ELs include: EL 5055 = 1,261 sq kms –  includes  Hillside Mineral Lease Tenement EL 4514 = 24 sq. kms   –  coastal strip from Black Point to Tiddy Widdy – previously Coastal Protection land EL 5056 = 416 sq kms –  two sections, one centred on Curramulka and the other on Maitland. EL5362  = 151 Sq kms   – the new Whiting Area

WHY IS REX ACQUIRING FURTHER EXPLORATION LICENCES, GIVEN ITS CURRENT DIFFICULTIES IN GETTING HILLSIDE OFF THE GROUND?

The reason may be found in Rex’s  2014 Annual Report (page 4) which notes: “The Hillside Project is one of many potential large-scale copper-gold projects on the Yorke Peninsula within Rex’s wholly-owned exploration licences on the Yorke Peninsula”.   Rex has previously stated that, once it starts to build the Hillside plant, it will aggressively ‘look at’  50 other potential targets so far identified within its  existing licences.   Rex’s  goal?  To develop a network of large, open-cut satellite mines with raw material transported back to Hillside for processing via a series of haul roads.

When Rex have finished, will anything be left for future generations other than a landscape pock-marked with open pits and piles of waste rock?

While Rex Minerals’ proposed Hillside mine is the only one so far on YP to reach the point of a full mining lease proposal, at least eight other exploration companies are now operating on the Peninsula.

Two announcements in recent weeks indicate that these other companies are finding economically viable deposits of copper and other minerals.

The company claimed this was “a real milestone in the development of a Mining Project”.

In this ASX release, Marmota announced high grade copper assays on its ‘Champion’ prospect at West Melton (near Paskeville). The company claims there is a strong zone of high grade copper mineralization approximately 1 km long and 750 metres wide.

These two announcements, combined with YP copper discoveries by other exploration companies over the past 12 months, highlight the real and imminent threat posed by mining to agricultural activities across the entire Yorke Peninsula.

This is no longer an issue affecting just the farms in a localized area around the proposed Hillside mine. It is now a fight for the entire Peninsula.

Please become active in fighting against invasive mining on the Peninsula.
Please join YPLOG and help spread the message.
Please alert your neighbours by passing this information on to them. 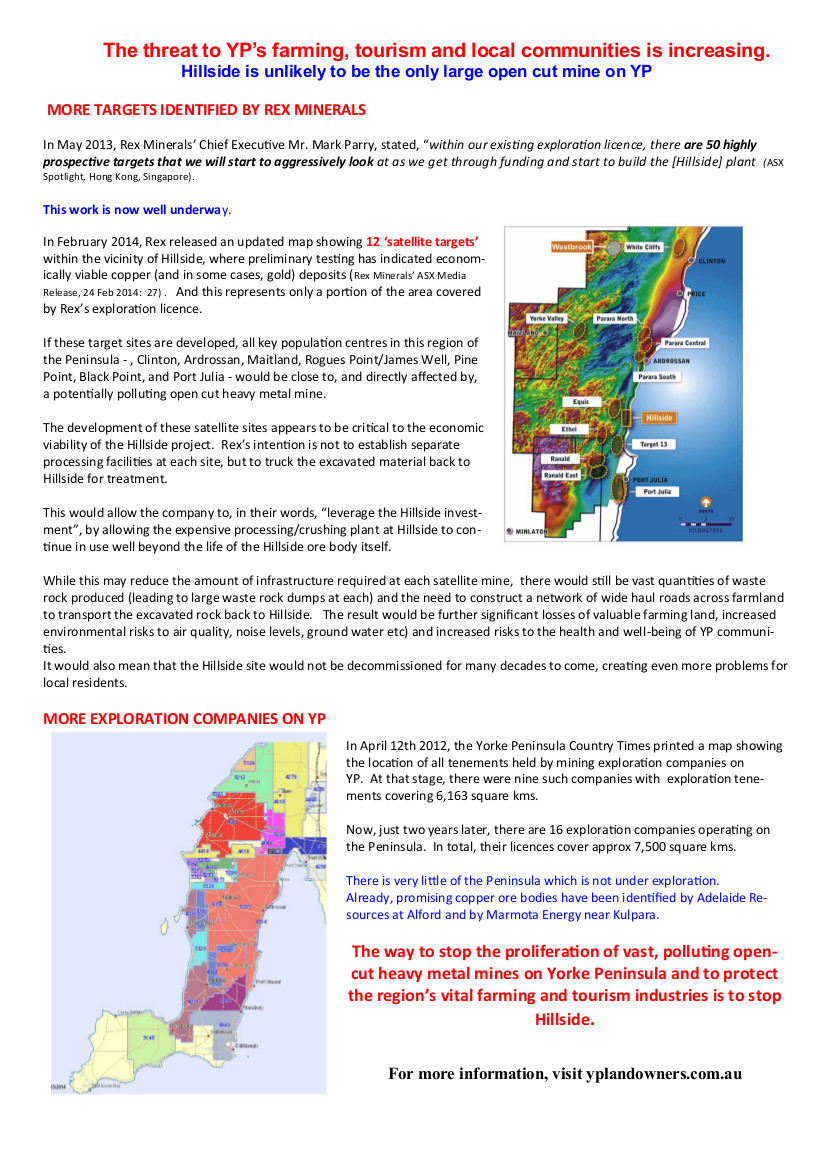 How many more mines – Factsheet (PDF)